March 19, 2019
This case study describes a March 2019 survey of Sierra Olympic Technologies (SOTI) Customer, Jeffrey A. Carmen, Ph.D., owner of Olde Barn Technologies in Manlius, NY. (http://www.stopmymigraine.com). Dr. Carmen is a licensed psychologist who developed a novel neurofeedback technique in 1998 called Passive Infrared Hemoencephalography (pIR HEG). pIR HEG is used frequently to treat migraine headaches, but is also very effective at treating a variety of other disorders involving excessive rate and magnitude of response to relatively benign stimuli. In plain English, people who over react to things will react less strongly and less quickly. pIR HEG is now used worldwide to treat a variety of mental disorders such as anxiety, depression, and ADHD. It continues to be a predictable method of treating people with migraine headaches. This is especially useful for women who want to become pregnant or are already pregnant because they cannot safely take any migraine medications. There are over 1,000 of these systems in use currently. The mechanism of action of this system is to make the Prefrontal Cortex dominant, which keeps the fight/flight/freeze response relatively quiet. It also inhibits the brainstem migraine generator from generating high quality migraines. People still get the migraine headaches but have a relatively difficult time telling that they just had one. Shortly after developing the pIR HEG system, Dr. Carmen searched for a way to monitor prefrontal cortical brain activity. There are many ways to do this, including monitoring brain waves (EEG), but he needed something fast as well as reliable. To this end he refined the use of infrared imaging so that it could produce an image of the brain activity in the prefrontal cortex. Baseline images could be gathered at the start of each session and tracked over time, correlating with symptom changes. He found that while the average thermal output through the forehead remained relatively stable, the extreme highs and lows reduced as symptoms improved. He has a database of over 30,000 infrared images that he has acquired in his office. Worldwide clinicians have captured in excess of 100,000 images. APPLICATION According to Dr. Carmen, pIR HEG does not measure brain temperature. In fact the brain carefully guards and regulates its own temperature to preserve cell health. pIR HEG does measure the thermal waste product of these cells. Some of that thermal waste passes through the forehead and is captured by the pIR HEG system. It is also captured on an infrared camera that can track the heat patterns over time, correlating with symptom improvement. Most of this thermal transfer is managed by increased blood flow, although the increase in blood flow is not the goal. Increased cellular metabolism is the goal. The pIR HEG system monitors brain activity while the patient watches a movie. When the movie generates a strong emotional response, the prefrontal cortex goes offline, reducing the output and causing the movie to pause. The patient then must quiet emotions and concentrate on a bargraph that has appeared on the screen. This dual process causes the bargraph to respond upwards and the movie to restart. The following images represent treatment for depression: 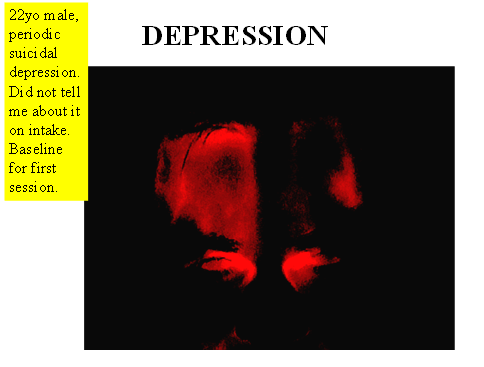 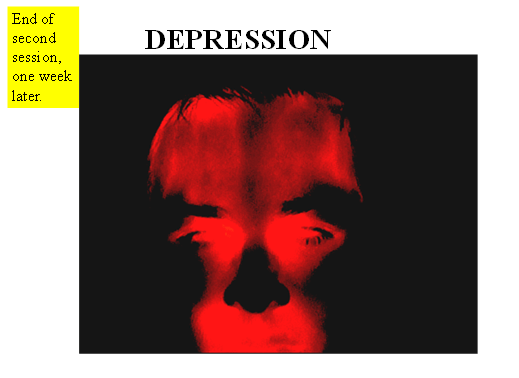 Dr. Carmen uses very expensive infrared cameras in his office. Many people have asked him about the cost of purchasing such a system, but only a few have been able to manage the cost. The VIENTO line of cameras is now available at a price point to enable people to set up a complete thermal imaging system in a relatively small office and a reasonable cost. The system represents “office grade” hardware and software. “research grade” would require a much more substantial investment. A relatively unique aspect of the VIENTO is that it is thermally very stable which is essential to making repeated images meaningful. Dr. Carmen now assembles and markets a complete system that includes a specially configured VIENTO G camera with a lens that allows the camera to capture a full screen image while remaining roughly 3 feet from the patient. This is important to eliminate the image distortion created by allowing the camera to move too close to the patient. He also uses special software and signal acquisition hardware to interface with a computer. That is only the beginning. Acquiring meaningful images is a complicated process. He conducts special training in acquiring and interpreting these thermal images and provides ongoing support for people who decide to take the plunge into infrared imaging. 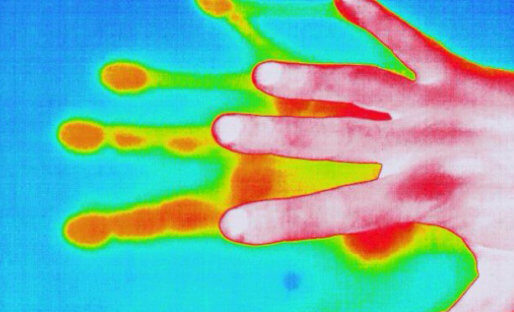 The study of natural surface interaction is a cutting edge area of research that aims to answer, "How to turn any surface into a computer".  Read how the work of Professors Sean and Natasha Banerjee, using Sierra Olympic’s Viento G Thermal Camera, may one day allow a human to interact with any surface as though it is a computer.