July 2, 2019
https://youtu.be/vuTdhqJmGLk The design of the Ventus OGI camera represents a leap forward in the development of MWIR cameras, making it the smallest, lightest and efficiently-powered OGI camera available. Weighing 580 grams with a lens and sized at 146.6 x 70.9 x 73.1mm, the Ventus OGI represents a significant improvement over previous designs that can be up to twice as large and much heavier. The low SWaP Ventus OGI camera, recently EPA 0000a CERTIFIED, is well-suited for use on multi-rotor or fixed-wing unmanned aerial vehicles (UAVs) where it can be employed to survey areas in gas processing plants that may be difficult to access. Enabling a camera to fly over and around stacks and pipe racks also eliminates the need for personnel to carry out manual tasks, creating greater efficiency and lowering the cost of operations management. Aerial surveillance is also an excellent way to perform checks on long sections of pipelines (Figure 3 ). Traditionally, this has been a task performed by manned helicopters that require both a pilot and a camera operator. With the Ventus OGI, lengthy surveillance procedures can now be carried out by unmanned drones which perform more consistently and are less expensive to operate. 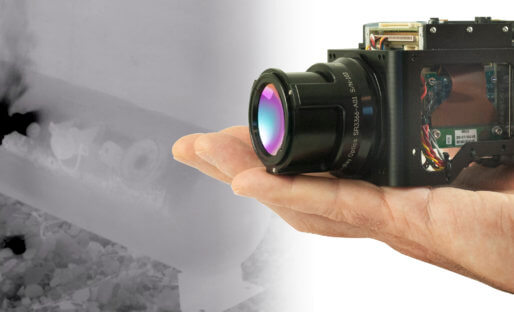 Using MWIR cameras to detect emissions helps guarantee the safety of people working in and around the oil and gas equipment.